Where on Tour is LWM?

If you like Teton on Facebook, you’ll know we’ve been following Lorin Walker Madsen on his Forever West tour which just ended in Ogden, UT. I had the pleasure of seeing this last show. I have to admit, I was a little worried the show would be a bit rushed. I’ve been to shows at the end of touring schedules and it seems a lot of artists just run out of steam. Lorin and The Hustlers are not that band! Not only did they play for over 3 hours, their energy never wavered. Watching them play was pure joy, as is the case when witnessing anyone who truly loves what they do. They hooped, they hollered, they jumped, they twisted, they stomped, they sang, they strummed, they plucked, they played and they loved every single second of it.

Riding home the next day, my husband commented that he could never live out of a suitcase for 5 weeks. Five weeks, 32 shows and over 3,000 miles! While I agreed with this sentiment, I replied, “If you really love what you do though, I bet it’s a lot different.” We chatted more about the pros and cons of living on the road and I decided I would ask Lorin about the touring experience when we got back. As always, he was more than willing to send me something. I hope you pick up on his love of music the way I did, watching him play and talking to him afterward.
Lorin, if you’re reading this, thank you for a wonderful Saturday night. Your excitement about what you do and continued support of Teton is infectious. Here’s to many more tours!!

From Lorin:
As I always say, “It never gets easy leaving the ones you love to do what you have to do in this life.” And, after living on the road for over a decade now, that still holds true. The past 5 weeks were an amazing tour throughout the west coast & northwest. I got to see many old friends and familiar faces and had the opportunity to meet and make new ones along the way.

A few of my favorite stops on this tour include:
Wenatchee, WA: I’ve been playing here on tours through the PNW over the last couple of years and this has become one of my favorite stops in the country. The community, the people and the energy at these shows is always electric and honest. If you’re traveling through Wenatchee, stop into Wally’s House of Booze and let them know that LWM sent ya!

Moscow, ID: A hidden gem in the PNW is the long standing, John’s Alley, in Moscow. I’ve only played here a few times, but it is hands down one of the best venues out that way. I’ll be honest, college towns are not always my favorite on the road, but there’s something great going up there in Moscow, ID. If you make it up there, stop into John’s Alley and tell “Vertical Dave” that I sent ya.

San Luis Obisbo, CA: As a touring musician, it’s always hard to make a run through California. It’s tricky to find the venues/bars or hidden gems that exist out there. However, I assure you, after this tour of CA, there are plenty of them. I did a 2 night stand at the Frog & Peach and was blown away by the wonderful room, staff, and people who came out to enjoy the live music. SLO is known for being a great stop in California along the central coast, so next time you’re out that way make sure you stop into Frog & Peach.

Those are a few memorable stops over the last 5 weeks out west. There’s nothing I enjoy more than visiting brand new places & sights, along with revisiting old familiar ones that I continue to fall in love with more and more each time.
You can find beauty no matter where you are out there in this crazy world, you just need to make sure you’re looking hard enough. – LWM

Lorin is headed back out October 2nd through Halloween. You can check all his upcoming shows here and see his Teton Artist bio here.

Until next time,
–Jenn
team@tetonguitars.com

Lorin was recently featured on Mike Herrera’s Friday night podcast. He talks more about life on the road, songwriting and original music. Find it here http://mikeherrerabestlife.tumblr.com/mhp under previous shows. 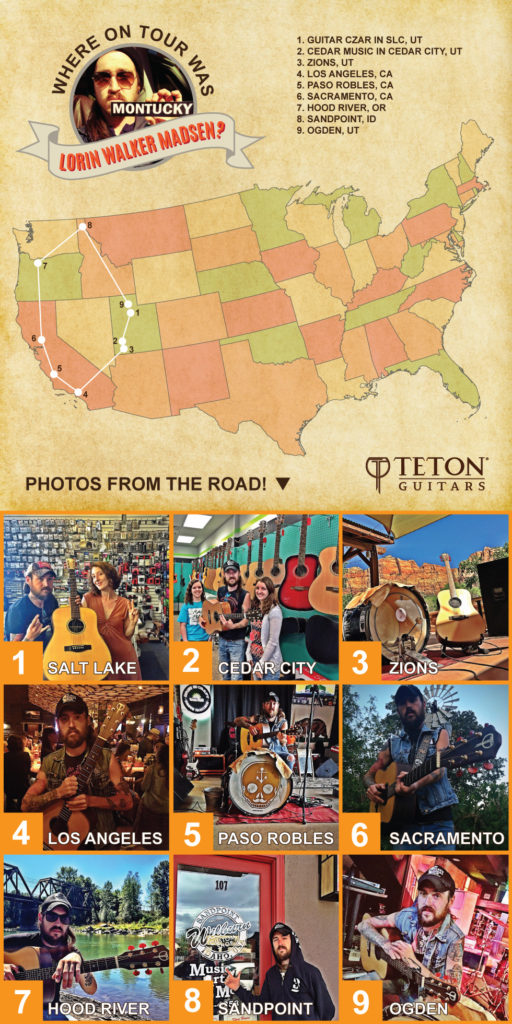